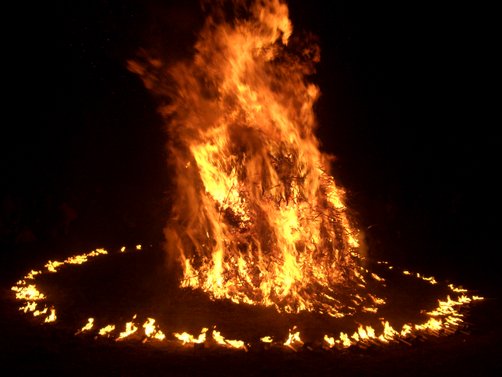 The 17th February is an important date of celebration in the Waldensian Church. Collected together here are 3 articles from the Waldensian review about its importance and how it is traditionally marked.

17th February is a big day in the Waldensians’ calendar, as it celebrates the day in 1848 when, after centuries of persecution, the Lettere Patenti issued by King Carlo Alberto gave them freedom. No longer forced to stay in the ‘ghetto’ of their valleys, they could also take the gospel message throughout Italy – as they were challenged to do by Beckwith!

After having celebrated 17th February for the last couple of years in Torre Pellice, Villar Pellice and also many years ago in Luserna San Giovanni, this year I was pleased to be able to celebrate the occasion in San Secondo di Pinerolo, where Claudio Pasquet is Pastor.

As many of our readers know, the celebrations start on the evening of the 16th with falò [bonfires] being lit all around the Waldensian Valleys. From the field where San Secondo lit their falò this year you could see a number of other bonfires in the local area. Special to the falò at San Secondo is that in the foothills nearby there is a construction of lights in the form of the Waldensian emblem, the candle surrounded by seven stars. Another difference from other falòs I have attended was the enormous amount of food available! Those of us who had braved the rain and had walked up from the Church in the centre of the town and were a bit hungry did not need to worry! There were also hot drinks including mulled wine – no mean feat given that we were in the middle of a large field. The singing around the bonfire is also a common feature at every falò I have attended – I especially enjoy the singing of Il Giuro di Sibaud –a rousing Waldensian call to faith in God. Interestingly, in San Secondo they sing it in the original French around the bonfire, but in Italian at the service the next day.

Unlike in the Pellice Valley, where 17th February is a school holiday, outside this area parents can request an authorised absence for their school-age children. Despite being few in number, the children in san Secondo contributed to the service by singing a song based on Martin Luther King’s ‘I have a dream’ speech. The church was packed for the service, which included Holy Communion, and the guest preacher (and after-lunch speaker) was the former Moderator, Maria Bonafede. After the service, about 100 of us sat down to a sumptuous meal with many courses – including zuppa Valdese, a soup made with stock, grissini, cheese, nutmeg and cinnamon. It was great to see people of all ages eating together – a real family atmosphere. During coffee there were speeches from the mayor and Maria Bonafede, who spoke about Mediterranean Hope – the Churches in Italy’s response to the migrant crisis. The young people serving at the tables were all from the new youth group which has recently started here and which we have recently supported in a very small way.

In many congregations, especially in the Pellice Valley, the day ends with a theatrical performance or ‘recita’. The content can range from quite highbrow, a comedy or something written specifically for the event. In San Secondo they hold their recita on the following Saturday and this year it was ‘Il Temp(i)o della Libertà’, which was about a family in Luserna San Giovanni between the early 1800s and 1848. It was excellently performed and was essentially about what the celebrations help us to remember! The play was also significant in that it had been written by Pastor Pasquet himself to celebrate the 150th anniversary of the Lettere Patenti in 1998.

On 17th February 2008 I had the privilege of taking part in a ceremony celebrating liberty. The Waldensians had been confined, ghetto like, in their alpine mountain valleys by the Dukes of Savoy for centuries. On 17 February 1848 Carlo Alberto, the ruler of Piemonte, signed a decree granting civil and political liberty which released them. A few days later a similar decree released the Jews from their Turin ghetto. It was another 20 years before religious freedom was granted. Every year, on 16 February, communities in the mountain valleys have torchlight processions and communities and individuals light bonfires in celebration of the decree and these can be seen burning on the mountainsides.

We set off from the centre of Torre Pellice, nearly 300 people of all ages carrying flaming torches, including children, to walk the two kilometres up the valley to nearby Coppieri where a bonfire was set up. It was a stirring sight looking back down the slope at the lights of the procession behind us. When we reached the fire we placed the flaming torches on the ground radially in a ring round the bonfire but clear of it. The fire was lit and we all stood around it, many deep, while the Waldensian ‘anthem’ was sung. Thirty litres of mulled wine had been prepared and was consumed. The British health and safety freaks would have banned the event, but parents kept an eye on the younger children who had torches and everybody behaved and nobody was hurt.

The bonfire is a work of art. Typically it starts with a pole about 25 feet long being placed vertically. Dry branches and bundles of brush are built up in a cone from a base of about 15 feet diameter, leaving a chimney around the pole. A large bunch of dry resinous pine tree material is tied to the pole at the top of the cone The fire is lit there at the top by a man on a ladder. It takes in minutes, and the hollow centre acts as a flue. Once going, 12-foot flames issue like a blow-torch from the top and the fire burns for a long time.

The following day, the 17th, after the morning thanksgiving service over 200 people sat down to a communal celebratory meal. The church had been very crowded and the pastor, commenting on the shortage of space, suggest that they should come next Sunday when they would find there was more room. It was a moving series of events in which to join and be amongst friends.

We had heard much about the 17th February celebrations in the Waldensian valleys, so we were delighted to be invited to join the community in Torre Pellice for this year’s events, commemorating the advent of religious freedom in Italy in 1848.

As background, I should explain that we are two Methodists who have recently moved to Turin, and have been enjoying attending both Italian-speaking and English-speaking Waldensian congregations here. We are delighted to be able to spend more time with the Waldensian church following a year’s voluntary work at La Noce, Palermo. Back to the celebrations... we knew that great things were in store when we began the evening of 16 February with a dramatic torchlight procession start- ing at the Tempio Valdese, and heading uphill. The large number of flames lighting up the darkness was an impressive sight and, looking back from the front of the procession, there were lights twinkling down the hill as far as the eye could see. When we reached the place designated for the bonfire (falò), everyone laid their torches in a ring around the brushwood piled high, which was then lit. The flames gradually took hold, and the hymns began. Following the vigor- ous hymn singing we were refreshed with mulled wine (vin brulé).

On the morning of the 17th itself the church was packed. The choir sang several anthems, and the numerous children of the Sunday School provided a delightful piece about what ‘liberty’ meant to them. It was also lovely to observe several women dressed in traditional Waldensian costume, with long skirts, scarves and bonnets. Possibly the highlight of the whole occasion was the community meal after the service. This was quite a marathon, with at least five courses, each delicious!

It was a real inspiration to share the celebrations with a community which has a collective memory of comparatively recent persecution, and as a consequence which values the importance of religious freedom. This is something which we perhaps too often take for granted. 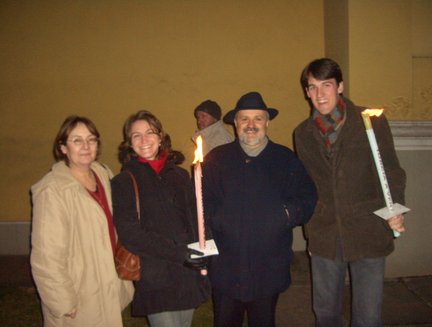 These articles were originally featured in the following editions of The Waldensian Review: