A Waldensian child meets Primo Levi and learns about the Holocaust 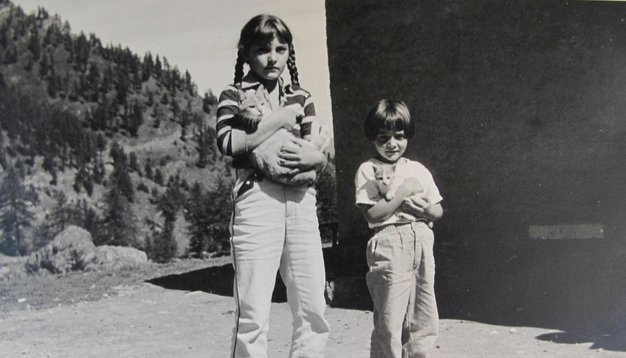 This article by our executive secretary, Erica Scroppo-Newbury was originally published in Riforma, the Italian language Waldensian newspaper, but is now available here in English.

I was born and brought up in the Waldensian Valleys for the first 5 years of my life. When I was nearly 6 we moved to Turin and from the small class of boys and girls in Bobbio Pellice I was plunged into a class of 42 girls in a State Primary School in the city centre. Those were still pre–Vatican Council II (and post Fascist) days and the teachers didn’t like my not being a Roman Catholic. When the Catholic priest came for his weekly indoctrination lessons, I was promptly sent to the freezing lavatories even in winter.

My parents were not happy about this, also because apparently the priest had told my schoolmates to pray for me, since I was destined for Hell! Every morning they prayed for long time to everything possible: Mary, Saints, Angels, but never to God. When my mother asked if the Lord’s prayer might be included, so that I could pray with them, nobody seemed to know it!!! It was soon decided that the next school year I would go to the Jewish School.

It was and still is a great school next to the Synagogue and near the Waldensian Church (built with the help of General Beckwith and the Waldensian Church Missions) in what is known as the Waldensian Quarter. The school had opened soon after the Racial Laws (1938) forbade Jewish teachers and students to attend State schools and after the war it was decided to keep it and open it also to children of all faith or none.

Mine was a small class of boys and girls, a bit more than half of them Jewish, the rest Waldensian, with a few “free thinkers“. I remember my bewilderment on discovering that a lovely girl called Eva had no religion at all! How was that possible??!! My world aged 7 consisted in Catholics (a rarity, 4-5 people in Bobbio Pellice -the priest and the carabinieri- though they were the great majority in Turin), Jews and the glorious Waldensians! I also remember my astonishment when my parents didn’t seem too shocked by Eva’s statement. Obviously religious identity was important to me if aged 3 and a half on visiting England, as soon as I recovered from a perilous Channel crossing in a steamboat that seemed tiny compared to the gigantic waves, I asked “Who is the God of the English?”. But this is another story…

Our Jewish teacher was incredibly strict and very old fashioned. We recited long prayers in Hebrew, but I was happy to join in, since we prayed to the same God.

One of my best friends was a little girl called Lisa, who my parents soon discovered was the daughter of their friend Primo Levi, who had written a beautiful book about his experiences in Auschwitz, which had sold few copies and had been soon forgotten. (If this is a Man And, reprinted in 1958 would become a world best seller also thanks to my generation’s interest)

One year later, in Summer 1957, the Levi family came on holiday just behind the farmhouse we rented all year round in Subiasco, between Villar and Bobbio Pellice and we children spent hours together, playing, talking, climbing trees, walking in the woods.

During one of those family walks, Primo Levi stretched out his arm to help me cross a stream and…that moment changed my life forever. I noticed a greyish number on his forearm and asked him what it was. That glorious afternoon my childhood, aged 8 and a half, ended. I will never forget the doubtful and embarrassed looks that my father and Lisa’s exchanged. “It’s a present from the Germans” Primo answered with half a smile. Obviously, that was not an answer that could satisfy my curiosity. Stubborn as I was, I kept on bombarding every adult with questions until little by little the atrocious truth started to come out. My parents couldn’t find their own copy of If this is a Man and when Levi went to Turin he brought back one of his and my mother would read me some pages every evening (I imagine she censured the dreadful bits), as a bed time story!

I already knew about the war, having been brought up in a place where so many young people had been members of the Resistance, or had helped them- like the Minister who christened me. Having attended the Jewish School I also knew something about the Shoah, but that tattoo was different: it was a brand on my flesh, on my conscience…How about the children? Also them? Why? Then many of my school friends a few years earlier might have ended up in smoke? Sweet Daniel, with his blond curls, who held my hand during the long melodious prayers to the God of Israel, who was also my God? Lisa? Lia? Marta? And why not me??!! Even now just the thought of it brings tears to my eyes. The same if I hear talk of revisionism or attacks on Israel. After what happened, in my opinion nobody has any right to say anything against the Jews for at least a millennium. Israel for me was and is the rock in the desert where the survivors like Primo hung on. They and Primo Levi have every right to criticise it, but we, and I bring that responsibility also on myself even if then I hadn’t yet been born, do not have any historical nor moral rights!

After that episode I became more thoughtful, I felt very protective of Primo and, despite being a boisterous noisy little girl, whenever he was around, I became pensive and sat quietly by his side. I grew up reading his books and moulding my Italian on his crystal clear language. I often saw him and his daughter told me that he was very fond of me. When I became a Secondary School teacher of Italian, the first two books all my students had to read were: Anne Franks’s Diary and If this is a Man.

The last time I saw him it was in Turin at a conference on Religion Freedom. He was in the audience and I was very happy to be able to introduce him to my husband, who was moved and honoured to meet Primo Levi. I then complimented him on his novel If not now when? And he was, in his typical unassuming way, pleased that I had liked it.

This article was orginally featured in Italian in Riforma.