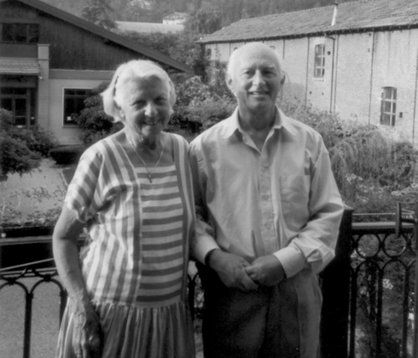 Prescot Stephens, who died earlier this year at the age of 94, was a vivid example of the great love that so many Britons during the centuries have felt and still feel nowadays for the Waldensians and the Waldensian Church. The order of service for the commemoration of his long and fruitful life bore, on the front page, the Waldensian symbol with the candle and the seven stars and above all the distinctive logo LUX LUCET IN TENEBRIS. One of the pictures showed Prescot as a little boy in the Waldensian Valleys during one of the many tours organised by his father, Captain Stephens. On the last page, the invitation to sustain in his memory the Waldensian Church Mission, the Society set up in 1825 by Canon Gilly – of whom I am the unworthy heir – that had General Beckwith as its ‘local’ agent and in which Prescot’s family, through his aunt and his father (that Captain Stephens fondly remembered by so many Waldensians of the older generation), got involved from the end of the 19th century.

Prescot Stephens was born in 1918 in Ottawa and, like Beckwith, he belonged to a military family. His father, Richard Markham Stephens, was an officer of the Royal Navy ‘lent’ to Canada in 1909 in order to help build a Navy in preparation for a war that seemed more and more inevitable. The politicians talked and dithered and in the end it was this quiet man and strong believer who managed to make Canada ready for war. Captain Stephens, who had married the lively daughter of a Christian Jew, had been giving illustrated talks about the ‘land of the Jews’ – as Palestine was then known! – and which nobody in those days had ever visited. Captain Stephens was offered promotion to Flag Rank as an Admiral but, after his wife’s miraculous recovery from an illness that was threatening to make him a widower, he decided to change his life. He retired from active service, went back to Britain and dedicated himself to the service of God and humankind. In 1926, with young Prescot, he paid the first of many visits to the Waldensian Valleys; later he would lead parties of English visitors on excursions that in the higher parts, where no roads existed, continued by mule. He was also from the beginning active in the rescue of Jews from Nazi Germany, and when WWII started son and father were both involved in it. Prescot opted for the Meteorological Service of the RAF, thinking that in that way he might have fewer chances of killing other human beings. Sent to Italy, thanks to his previous contacts he managed to meet many Waldensians with whom he established cooperation, aid and long-lasting friendships.

The war over, Prescot married in 1945 and went to work for the bank of England. However, he never forgot his permanent love for the Waldensians, which he passed on to his wife Peggy and their three children. Having taken early retirement in 1973, he became even more involved in the Waldensian Mission. He joined the Committee in 1948 and has been a Trustee, Chairman, Vice-President and President (he did not consider himself important enough to be called Patron). Not only did he take his father’s place in organising group visits to the whole of Italy and fund-raising in order to support new projects, such as La Noce in Palermo, and establishing institutions such as hospitals, schools, children’s homes … but he also started the passionate research that culminated in the excellent Waldensian Story, a profoundly researched history in 374 pages covering the 12th to the beginning of the 21st century, and thus providing at last a story of the Waldensian people and Church for the Anglo-Saxon world with its particular cultural and religious background and presuppositions.

Generous, kind, with a gentle sense of humour, Prescot was the personification of English liberalism and Christian rectitude. His daughter, Joy, recalled how he taught her not to take advantage of public money even when she was entitled to – such as with the free school bus – and also how he never interfered when she chose to live as a missionary in Nepal and Tanzania. She also remembered how, after seeing the flat she wanted to share as a student in a run-down part of London, her mother broke into tears. Prescot took Peggy’s arm and led her back to the car, saying ‘My dear, if she wants to live in a slum, we should let her!’ Joy ended by saying that she knows some women struggle with the image of God as ‘Father’ but she is not one of them, because hers gave her ‘the most beautiful example of what being a good father means’.

I find it very meaningful that, shortly after Prescot’s death, Joy felt drawn to go to Torre Pellice with her daughter, where they even climbed up to Bars d’la Tagliola, a seemingly impervious secret cliff-face hideout used as a refuge by the persecuted Waldensians.

I myself learnt only a while ago that some members of the Committee had resisted my taking the post of Executive Secretary after Bishop Ward’s retirement, since I was a woman and a foreigner, and Prescot had vehemently supported me. I feel very grateful for this and hope that I have proved him right.

I am delighted that the publisher Claudiana has now decided to reprint The Waldensian Story, which has been out of print for years and is in great demand. I ask the Lord to give me the strength to continue Prescot’s work and to see my Church as he did and to love it unconditionally, as he taught all of us to do.

The reprint of Prescot's book, The Waldensian Story, available to buy now in our shop.

This article was orginally featured in the Winter 2012 edition of the Waldensian Review.  Download