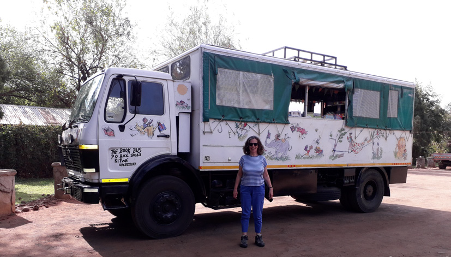 In August 2019 I was privileged to be able to spend 3 weeks in Zambia working with the British charity ‘The Book Bus’. This charity seeks to promote literacy and works alongside schools in the teaching of reading and writing. As many of the schools in Zambia, especially those not in the towns, have very few resources and even fewer books, this is achieved by means of a mobile library which takes books to the rural villages, often travelling in difficult terrains to get there. The Book Bus currently works in Malawi and Ecuador as well as in Zambia, where the work has the approval of the Ministry of Education. Volunteers are sent to work with local staff and volunteers. Once a child can read and write in English, their chances of being able to provide for their families as adults increases dramatically; despite this, still only about 50 per cent of children finish primary school. The Book Bus mottoes are Supporting Reading Changing Lives and Improving children’s lives one book at a time.

My application to work with The Book Bus project based in Livingstone was accepted, which was particularly exciting not only because I am passionate about reading and books, but also because having read an article in La Beidana* and having visited a recent exhibition at the Centro Culturale Valdese in Torre Pellice, I realised I would be following in the footsteps of many Waldensian missionaries, Luigi and Adolfo Jalla in particular, who worked in and around Livingstone from the late nineteenth century onwards as part of the Paris Evangelical Missionary Society. They set up schools, churches and a school for evangelists. Adolfo translated books, including Pilgrim’s Progress by John Bunyan, into the local language (Zambia has over 70 indigenous languages). Later on, in 1926, his daughter Graziella Jalla set up a Girls’ School – the first one in the country and she later also ran women’s groups in Livingstone.

Livingstone is one of the only towns in Africa to retain its colonial name. David Livingstone, the Scottish doctor, explorer and missionary, is still held in high regard by the Zambian people – the local museum has a section dedicated to him (which includes his overcoat that must have been surplus to requirements in Zambia). There are also several schools named after him and many statues and monuments. This affection is probably because, unlike most colonists in nineteenth-century Africa, he was from a humble background, worked actively against slavery and employed several Africans in his team. Although Livingstone was dead and buried (his body was returned to London by two of his dedicated African friends), his legacy in the town must have very evident to the Waldensians who worked there after him – indeed, Adolfo Jalla spoke at the celebrations which marked the centenary of Livingstone’s birth and Mrs Jalla was on the organising committee for the same event. Until 1935 Livingstone was the capital city, as it had prospered from its strategic position as a gateway to trade between the north and south sides of the Zambesi, as well as from the arrival of the railway line.

The town is still home to an incredible number of churches of various different denominations – some well known (Anglican, Methodist, Baptist, Catholic) and others not so well known – perhaps some owe their origin to Waldensian Missionaries all those years ago. The services, whatever the denomination, are notable for the energy, vibrancy and volume of the sung worship. Many of the churches also run schools, and there is a training college for ministers. Interestingly, a great number of shops have names influenced by Christianity, like ‘God’s Mercy General Store’ and (my favourite) ‘St Augustine’s Anglican Shops’; professing to be a Christian in Zambia is certainly not something you hide – I have never heard worship songs in a taxi in the UK, nor have I ever been invited to Sunday morning worship service by a cab driver in London! This is the positive legacy left by Europeans (particularly Italians, British and Swiss missionaries) who worked tirelessly and sacrificially in the area.

The first week I was on The Book Bus project, the school we were working with was in the Kazungula region (where in 1898 the Jallas hosted a Missionary Conference*). I soon learned that the school was just a series of dusty buildings, sparsely furnished and with virtually no resources and few qualified staff. Access to water was also very limited. The children walk between five and nine kilometres each way to school. Their ability to learn anything is not helped by the fact that the drought which has gripped Zambia (and the south in particular) for the last few years means that many are undernourished.

Kamatanda Community School was started five years ago by a retired government teacher and, until the finance came for the buildings, lessons were held under a mango tree. Last year she decided to seek funding for the children to be given a meal of nshima (maize), which has in turn improved attendance and attainment. Only when the school gets government approval will it be more secure, but then families will have to pay to send their children to school. The second school we worked at the following week was nearer to Livingstone, but bad roads meant that the 17-kilometre journey took the Book Bus 90 minutes to get there. The Chaba school, like Kamatanda, had no resources (and only one toilet for the school and the village). The villagers were struggling to survive, as the lack of rain meant the crops they depend on to feed themselves and sell in the markets in Livingstone were not producing enough, hence the children often seemed lethargic. The Book Bus seeks to make reading and literacy fun with songs, games and craft – and it was lovely to see these children being able to draw, colour, stick and cut with resources we had brought with us and which Zambian schools generally lack. The English and IT teacher explained to us the difficulty of teaching English with no books and IT with no electricity or computers. Afternoons were spent doing one-to-one reading with children in two of The Book Bus’s Community libraries.

It was an intense but deeply worthwhile experience which I will never forget – made more interesting by the fact I was also following in the footsteps of Waldensians who had left friends and family behind to serve God in a then unknown far-off land. 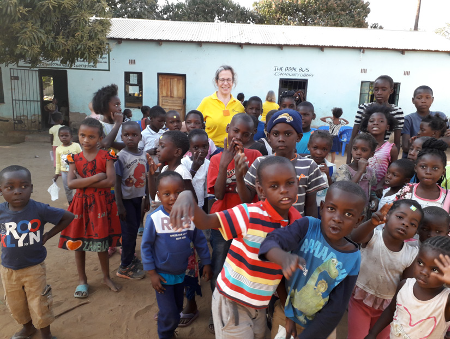 This article was orginally featured in the Summer 2020 edition of the Waldensian Review.  Download, Read Online