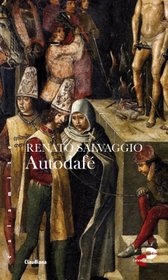 Renato Salvaggio – a Lay Preacher and a member of the Waldensian Church in Palermo – recounts the past as if he had been present whilst being most attentive to the facts weaving together both the characters and events in the tradition of the historical novel.

He had always been intrigued by Giacomo Bonelli, commemorated by a memorial in his Palermo Church, which stated baldly ‘Waldensian Pastor born in Dronero in the Alpine Province of Cuneo, burnt alive in 1560’. Nothing more is known. Southern Italy was then part of Philip 11’s Spanish Empire and the Archives of the intransigent and pitiless Spanish Inquisition have since also been burnt. So only the date and place of birth survive. Having discovered that Bonelli had visited the Waldensian Calabrian outpost of Guardia Piemontese, he thought it would be a good place to set a fictional story that would illustrate a documented historical event: the massacre of the Waldensians at the ‘Bloody Gate’ and elsewhere.

The main characters are two young people Giovanni and Caterina in some ways mirroring those of the great nineteenth-century novel Manzoni’s The Betrothed, but while Salvaggio’s novel is captivating, Manzoni’s, which was licensed by the Austrian censorship in Milan, is tedious, lacks a credible heroine since Lucia does nothing but blush, lower her eyelids and sigh. In contrast Caterina, the Palermitan embroiderer, is a force of nature, who refuses to abandon her beloved Giovanni and it is together that they face the tests and obstacles in their pursuit of both their own happiness but also of a just and free society in which all may follow their own faiths according to their consciences. Their love is fiery and Caterina’s mother is more open minded than many today. So too is their Confessor Father Cortes, not without reason in odour of ‘Waldensianism’.

The Palermo of the 1500s is a metropolis at the crossroads of the Mediterranean and Giovanni, a merchant, mixes with foreigners who import not just goods but also ideas like those of Luther and books from Geneva and he is avid to know more, especially after having heard the dignified and serene witness of Bonelli before being burnt. Similarly the beautiful Caterina, while not being a suffragette before her time, does not submit to intimidation and injustice and, if necessary, uses force.

The intrepid duo travel across Sicily as far as Messina, a freer and more open city than Palermo. Worried that even here is no longer safe, they cross over to Calabria, making for that Promised Land where live a people with strange clothes and customs, hardworking and honest and incredibly for those times practice non-violence.

After having fallen foul of human brigands and cruel friars and having met the legendary ‘Re Marcone’, they finally land among the Waldensians of St Sisto, where among whom they hope in fact to settle. Spaniards and the Inquisition, however prove impossible to evade and all hopes seem vain. After betrayal, blackmail, and massacres our couple decides to return home and it proves a true Odyssey.

These travails make us reflect on the crowds who thirst for blood and of the people kept quiet with Festas, Bread and Executions, but we also smile at everyday details like Calabrian sausages and the lesson on hinnies.

The book can be purchased online, direct from the Claudiana publisher, including delivery to the UK. If you are put off by the high delivery cost, please get in touch with us and we will see if we can pool a bulk purchase.

This article was orginally featured in the Summer 2020 edition of the Waldensian Review.  Download, Read Online